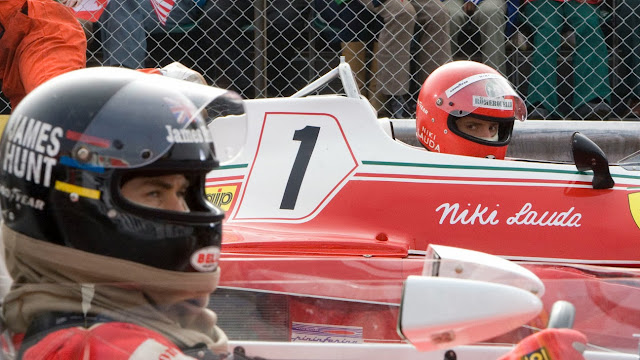 Formula 1 racing may not seem like something that would be Ron Howard's forte, but Howard originally cut his teeth directing features under Roger Corman on flicks like Grand Theft Auto. It is only recently that Howard has transitioned into Oscar fare like Frost/Nixon, Cinderella Man, A Beautiful Mind, but to discount his excellent genre work in The Missing and Apollo 13 would be a mistake.

When Howard is on, he's on (Best Director winner in 2002) and Rush is the director at his prime.

Chris Hemsworth trades in a cape and hammer for a racing helmet in Ron Howard's true story of the 1970s rivalry between rivals James Hunt and Niki Lauda (Daniel Bruhl). The story details the golden age of Formula 1 racing in the 1970s in which both James Hunt and Niki Lauda risked everything (including their lives) to become world champion in the world's most dangerous sport.

Hunt and Lauda couldn't be more different, Hunt starting in the lower ranks and building his way into the exalted F1 league whereas Lauda bought his way in. Rush highlights the dichotomous split of personality represented by the cold, rational Lauda and the devil-may-care Hunt, and the various definitions of success to them both on and off the track, during the astonishing 1976 season.

Hemsworth seems tailor-made for the excesses and debauchery of the decade that was the 1970s, channeling the same energy of a young Peter O'Toole with a devilish grin and wink. Thor may have made Hemsworth famous, but stretching his dramatic muscle in roles like these will only make his leading man star that much brighter. Bruhl takes a servicable part that would be ignored as a B-line in most features and relishes his opportunity to play a unusual protagonist. These two men may not mince words, but they respect each other even when glancing tires on the track.

What makes this film different from other sports flicks is that there is no mustache-twirling villainy taking place, both Hunt and Lauda are worth rooting for and both men's stories deserve to be told. From the glorious highs of victory to the somber lows of life-altering accidents, Howard doesn't cut away.

Rush doesn't just focus on only the drivers and their cars, but what put them in there to begin with: the constant and irrepressible drive to push life to its limits. Firefighters rush into burning buildings each and every day with the knowledge that any time could be their last, Formula 1 racing is similar, one wrong turn means death.

Academy Award winning cinematographer Anthony Dod Mantle puts the eye of the camera and the viewer right there in the driver's seat and inside the helmet. The hyper-paced cuts may be too frenetic for some, but it mimics the mindset of a man behind the wheel at 200 miles per hour.

Ron Howard's film never shorts on the sheer visceral thrill that is racing, but by elevating the material with technical prowess, and character depth matched with leads talented enough to provide it in Hemsworth and Bruhl, he builds a winner.