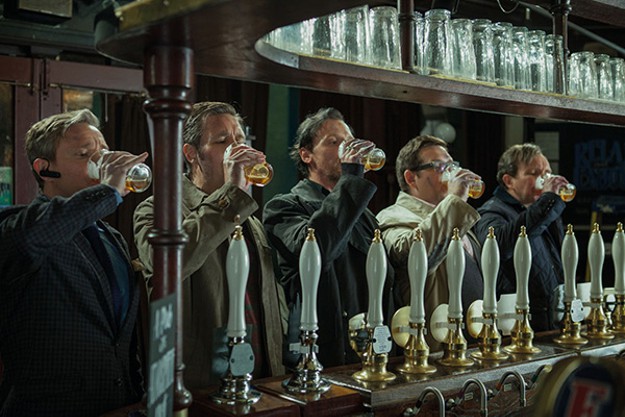 As the Cornetto Trilogy draws near an end, let us take a moment to appreciate how we got here. Before Simon Pegg was a key fixture in massive studio properties like Mission Impossible and Star Trek, he caught on as a layabout, who played video games with his buddy Ed (Nick Frost) before the impending zombie apocalypse. Ten years later and the smashing success of 2004's Shaun of the Dead and 2007's Hot Fuzz have brought Pegg, Frost and Edgar Wright to the mainstream.

As we gather to say goodbye to the wild romps that Wright, Pegg and Frost are known for there is only one question. Will their third feature come out on top?

Gary (Simon Pegg, taking his lead in a different direction this time) was an "outlaw" in high-school, his trademark black duster alerting everyone that he was on the scene. Gary wasn't really liked then and he certainly isn't now as a wayward 40 year old still rebelling against the system.

There was a time though when people did like him, twenty or so years ago during a pub crawl when Gary led Andy (Nick Frost), Oliver (Martin Freeman), Steven (Paddy Considine) and Peter (Eddie Marsan) on a drinking marathon that lasted nearly twelve pubs. They had three stops left before The World's End, but the beer caught up to them and the crawl ended in defeat.

Flash forward two decades and Gary's development is firmly arrested: still rebellious, still dressed like a Criss Angel groupie while the rest of his pals have moved on with their lives—families, careers, responsibility, you know, adulthood. Jonesing for a nostalgia trip, Gary convinces his friends to put life on hold and get together one last time to complete the historic pub crawl and reach the fabled World's End.

Reluctantly, Andy, Oliver, Steven and Peter go back to their hometown to appease Gary and to accomplish what they couldn't do twenty years ago.

Going home is never really the same, yet the rose-tinted shades of time usually don't distort things that much. The folks back at Newton Haven don't seem to remember Gary or the rest of the crawlmembers at all. In fact, much of the town looks different, the pubs that had each possessed their own little personalities and quirks look white-washed and homogenized. Even the menus are identical, down to the blue chalk and exaggerated font.

With each passing pint, Gary and the gang take another stab at reconciling their past with where they are now. Of course, as with any other get together with old friends, nothing goes according to plan, squabbles arise and Gary nearly winds up getting his ass kicked when something very peculiar happens. An event that makes the gang realizes their race to World's End isn't just a pub crawl anymore, it's a struggle for the entire human race.

Six years since their last film together hasn't dulled the comic timing of Wright, Pegg and Frost. Each line of the script is delivered with precision and an ample amount of irreverence. Riffing on genres is what made their careers and it's because they are the best at it. Zombie movies, check. Action movies, check. The box on apocalypse movies has a hole punched through it now.

The problem with most end of the world flicks is most get caught up in the spectacle of the special effects and completely lose sight of the people at the heart of the film. We already knew Pegg and Frost could craft loveable characters, but Paddy Considine, Martin Freeman and Eddie Marsan give tip-top contributions as well.

The entire team is at the top of their game here and firing on all cylinders. They bring the wit hard and fast in between rocking some hardcore fighting choreography that I didn't know they had in 'em (Plus, keep an eye out for another Timothy-Dalton-level-fun cameo!). Hot Fuzz and Shaun of the Dead are certified cult classics with infinitely quotable dialogue and memorable characters, consider The World's End safely among them as a classic.

Send summer out with a bang this weekend and send it out with a pint in hand.