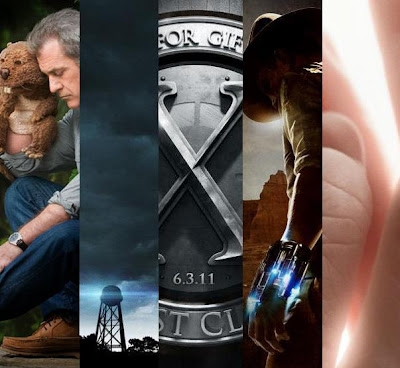 The Beaver
Mel Gibson has pretty much killed whatever success this dramedy was going to have. Maybe down the road the film will have better luck, but count me in for the ride regardless.

Super 8
Not much is known about JJ Abram's latest, but this looks like one of those summer films you can't miss and not expect to be called crazy.

X-Men: First Class
Say what you will about Ratner's X-3 and the Wolverine prequel. This cast has two magnetic (forgive the pun) leads in James McAvoy and Michael Fassbender. And best yet, no Brett Ratner.

Tree of Life
The trailer that debuted several months ago was gorgeous. Though if you thought that Super 8 was being deliberately coy in hiding plot points you will have conniptions with trying to figure out Tree of Life. This will either be the front-runner for the rest of award's season, or end up a stain of Malick's filmography. Considering Pitt and Penn's involvement I'll go with the former.