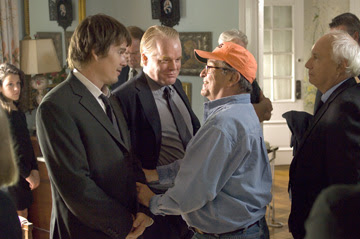 Sidney Lumet, the director of such immortal films as 12 Angry Men, Network, and Dog Day Afternoon, has passed away today. Though he is not celebrated as much as Scorsese, Coppola, or Kubrick, Lumet was prolific in his own right directing into his 80's. His most recent work is Before the Devil Knows You're Dead and he completed over 40 films during his career. Goodbye, Mr. Lumet, you will be missed.

Dan O'Neill said…
What a great legend! It's sad to see him go, but the legacy he will be leaving behind is absolutely enormous I must say.
April 9, 2011 at 11:19 PM

Fitz said…
12 Angry Men is so good just for the reasons you mentioned. No forced action, or romantic subplots and it is still tense beyond belief.
April 11, 2011 at 1:38 PM

JL said…
12 Angry Men is still one of my all-time favorite movies. Absolutely brilliant. What's more, it's hard to believe if was his film debut. Makes it even more amazing.
April 12, 2011 at 5:54 PM

Andrew said…
Making Movies is maybe the best book I've ever read about the process behind getting a film made from the script's inception to final distribution, and anyone who loves movies and wants to learn the ins and outs of the industry would do well to pick it up and dive right in.

Lumet was one of a kind, an incredibly gifted director and a truly wonderful human being. He went out on a high note and left behind a career consisting of some truly immortal movies. He'll be missed but never forgotten.
April 15, 2011 at 9:12 AM