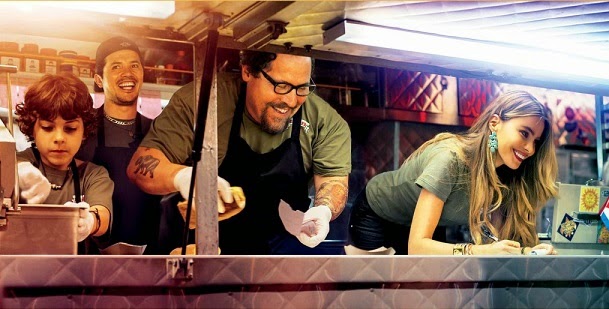 One for the studio and one for you. That's the mantra for actors/writers/directors who want to achieve some modicum of success while maintaining artistic credibility. The idea is intriguing yet the execution rarely works as described. Should the "one for Hollywood" succeed, sequels are greenlit, franchises are spawned and then one turns to three or four. Jon Favreau made his one for Hollywood, it was titled Iron Man. Two years later the sequel was met with much less fanfare.

With the exception of 2001's Made, Favreau hasn't made one for him in a while. When his next project following Iron Man 2 turned out to be a small-budgeted film about a chef, hope returned that Favreau could still make small pictures after striking gold with Marvel. Favreau stars here as Carl Casper the head Chef of one of Los Angeles' trendiest grub spots. His work receives glowing reviews, but his personal life is a wreck and the comfort of steady business has killed his creativity. The passion is gone and the menu consists of same old material recycled over and over for consumption.

Chef Casper's rut is a great metaphor for filmmaking. Audiences lap up the latest and greatest in summer escapism, studio execs push for carbon copy sequels and then the product gets stale and audiences turn. None moreso than critics. Critics go over the top for page hits, espousing vitriolic statements that leave others wounded in their wake. The stand-in for that critic in Chef is Ramsey Michel (a perfectly cast Oliver Platt).

After Michel's panning of Casper's stale offerings goes viral, Casper loses his cool and his misunderstanding of how Twitter works blows up into an uncontrollable internet meme. Casper didn't just call out a food critic, he completely loses his composure. It's hard not to grin in what must have been a cathartic release of sorts for Favreau after the experience of Iron Man 2. He unleashes into Platt's eagerly smug critic with panache.

One hopes it was worth it because he also loses his job. Left only with the advice of his ex-wife Inez (Sofia Vergara), Casper starts up a food truck to reignite the fiery passion that got him into the culinary profession to begin with. Armed with former kitchen staff mate Martin (John Leguizamo) and his son Percy (Emjay Anthony), he sets out on bringing his food to the masses again.

It's refreshing to see a drama that doesn't resort to forcing its main character to rock bottom before he makes a change. Favreau's script doesn't force any unnecessary drama, it lets the story breathe and focuses on the satisfying beats along the many foodie spots on the road from Miami to L.A.

Favreau wasn't always behind blockbusters, he started with Made before expanding to larger sets and expectations. Clearing out the cobwebs, making personal movies that mean something, Favreau is much more animated shooting on the cheap returning to his improv roots. Of course a few small turns with A-listers (Robert Downey. Jr & Scarlett Johansson) help.

Some pleasures don't need to be exquisite, just damn good. And Chef proves itself a thoroughly satisfying meal.