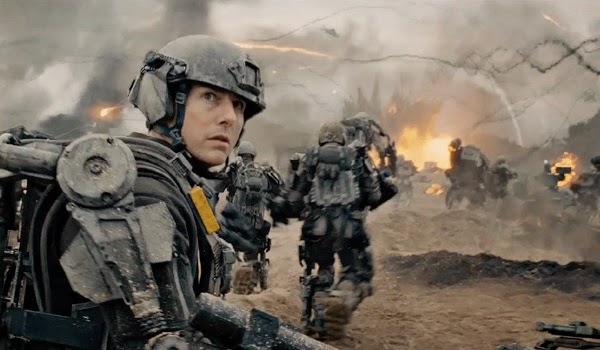 Major William Cage has never seen a day of combat of his life, but he sells war to millions on television everyday. A crisp officer's uniform and a broad, beaming grin are all he needs to send enlistment numbers skyrocketing. Earth is facing an all-fronts assault by an alien race and humans are losing. Badly. The "Mimics" have proven a daunting challenge, taking most of continental Europe in five years. General Brigham (Brendan Gleeson), of the United Defense Force, has one last trick up his sleeve: A suprise attack against the Mimics in France.

To help package this operation for the press, our man Major Cage has been invited to take part at the front lines. “I’m not a soldier, really,” he tells an unamused Brigham, but the general is not swayed. So Cage does what comes natural to him, he runs. Labeled a deserter, he is unceremoniously dumped into the capable hands of Master Sergeant Farell (Bill Paxton). Farell's view on baptism by fire is wholly discomforting to Cage, and Paxton more than holds his own gnashing some scenery while instilling the fear of God into the "recruit."

Operation Downfall is called a surprise attack, though it would be more accurately described as a suicide mission. Cage dies almost instantly, but, to his surprise, he awakens to find himself very much alive and being barked at again by Master Sergeant Farell. If comparisons to Groundhog Day are going to be made, it should be because William Cage, like Phil Connors, is kind of an asshole. Tom Cruise is accused of playing the same good guy constantly, but that criticism simply isn't true. William Cage isn't Cruise revisiting Maverik from Top Gun, he is a smarmy pitchman who is wildly out of his depth.

That is until he comes across Rita Vrataski (Emily Blunt), also known as the Angel or Verdun, for killing hundreds of Mimics on her first time in battle. Rita knows what is happening to Cage. More importantly, she knows how to use it to finally end the war. This time loop that allows Cage to "respawn" also gives him the chance to hone his abilities as a soldier, but only after dying over and over and over...

Repeated scenes are the main premise of Edge of Tomorrow, which then begs comparisons to previous films like Source Code, but Doug Liman, and writers Christopher McQuarrie, Jez Butterworth and John-Henry Butterworth have much more fun with Cruise's temporary immortality. Tom Cruise throws himself whole-heartedly into each and every death and Edge of Tomorrow offers plenty of opportunities for him to wind up flat on his ass. It could be tonally jarring to mix the deathly fear of combat and physical comedy in a summer entertainment package, but the line is maintained.

Edge of Tomorrow is the rare sci-fi that engages audiences on a level that isn't common for the genre. Too often the dialogue gets dragged down into clunky exposition to catch everyone up. To combat that issue, Liman and co. present the mechanics of Cage's situation and expects moviegoers to keep up.

Original summer fare is rare nowadays, to be truly successful stories need to be part of a franchise or have an instantly recognizable superhero. Edge of Tomorrow is based on a Japanese novel instead of a comic book, but the project has the ultimate trump card: The last true movie star in Tom Cruise and a perfectly cast Emily Blunt. Blunt shooting an exasperated Cage in the face as a reset shouldn't be funny, but the duo sell it every single time. Cruise hasn't had a project that fit him this well since Mission: Impossible - Ghost Protocol.

By the way, get Emily Blunt up for the part of Ripley inevitable remake of Alien. She's badass.