For Your Consideration: Christopher Nolan 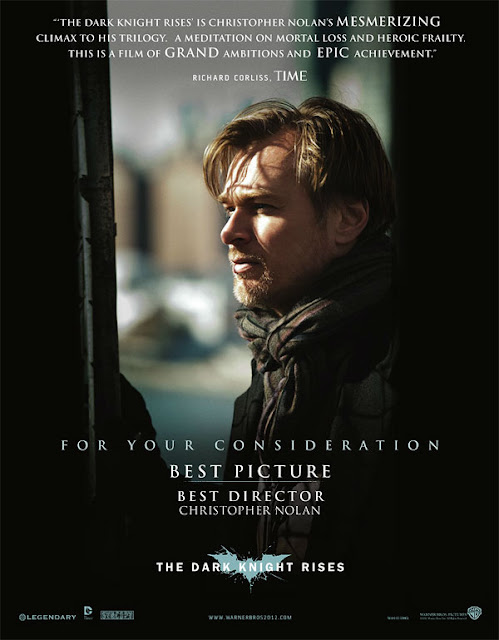 Until recently, capes and cowls were a less respected director's game. Flops like The Shadow and Batman and Robin had made it almost impossible for an A-list auteur to get withing a hundred feet of the genre. Then Sam Raimi and Bryan Singer took Spider-man and X-Men to unparalleled heights. Perhaps it was just the matter of getting the right person behind the lens.

After Warner Bros. chose him to take over the rebooting of their biggest icon, Christopher Nolan rewarded them by turning in two of the greatest comic book films of all-time. The problem that faced him afterward: ending the series on a high-note.

Nolan took all of life's anxieties and placed them in front of our eyes. A terrorist attack on a football stadium, financial market takeover, plane hijackings, nuclear weapons. The escapism of one of pop culture's biggest icons was thrown out the window. Every moral and social ill reflected on an eighty foot screen.

Similar to Peter Jackson's careful crafting in bringing an epic trilogy to a close, Mr. Nolan left nothing on the table and set upon leaving a legacy as large as the shadow Batman casts over Gotham. The Dark Knight Rises may not be the film that The Dark Knight was, overzealous marketing hyped the conclusion to a fever-pitch with almost unbearable standards to live up to. Still, that didn't stop him from amping the scale of the film up to 11. His handling of the IMAX footage created easily some of the most jaw-dropping shots of the entire year.

The Academy's snub of both Nolan and The Dark Knight in 2008 led to the rule named after the director that created for more than five films to be nominated for Best Picture. Whether or not they will see fit to reward Mr. Nolan or The Dark Knight Rises has yet to be seen. There is little word in awards races, but the AFI did include the film in its top ten films of 2012. A sign of things to come, or a casual nod to a picture that has gone overlooked? A January morning will have to tell.