A couple of pieces of note for J.J. Abram's upcoming Star Trek sequel:


Below is a set photo of Spock (Zachary Quinto) and Benedcit Cumberbatch's unnamed villain. The Vulcan Death Grip is alive and well. Cumberbatch appears to be wearing a Space Fleet Officer shirt so perhaps a double-cross is at hand? Either that, or Cumberbatch ate Quinto's lunch during the shoot. 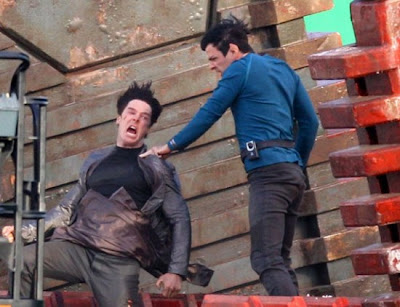 Finally, portions of Star Trek 2 will be filmed in IMAX! J.J. Abrams was taken with the process while serving as producer on Mission: Impossible - Ghost Protocol and decided to implement that into the sequel. In addition to the IMAX treatment, Star Trek 2 will be post-converted into 3D.

By Colin Biggs September 30, 2009
Just from gleaning the surface of Office Space one would assume that there isn't anything simmering below the surface except for a raunchy work-comedy, but they would be wrong.
After the harsh critical reception of his greatest work Moby Dick Melville wrote a collection of short stories called Bartleby and Benito Cereno perhaps the greatest slam at the time against industrial America. Bartleby is the story of a Wall Street copyist who has his three employees proof-read and copy law forms. Shortly into the story Bartleby starts responding to work commands with, "I would prefer not to." Frustrated by his employee's subordination the Narrator tries to have him fired but Bartleby refuses to leave the office. The Narrator comes back the following morning to find Bartleby living inside his office. Bartleby becomes increasingly less apt to perform basic functions as eating after he is jailed for trespassing and dies in a jail cell. What at once starts out as a comedy has …
7 comments
Read more