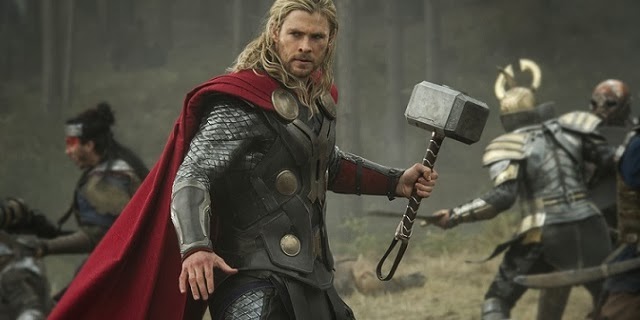 2011's Thor was considered the least accessible of all the films that take place in the Marvel Cinematic Universe when it was first released, but Chris Hemsworth's burgeoning stardom and the mix of fantasy and sci-fi has coupled together for something much more intriguing for audiences this time around.

At present moment Thor (Chris Hemsworth) is busy restoring peace and order to the nine realms doing battle with Warriors Three (Ray Stevenson, Zachary Levi and Tadanobu Asano) and Sif (Jaimie Alexander). There is much merriment to be had as future king after his string of victories, but banquets bring Thor no pleasure. Odin (Anthony Hopkins) and mother Frigga (Rene Russo) hope to see their son seek marriage with Sif and take his rightful place as successor to the throne, yet they can sense that Thor's priorities lie elsewhere on Earth.

An ancient grudge that took place between Dark Elves and Asgardians many millenias ago is about to be brought into present day. Malekith (Christopher Eccleston) was once ruler of the world covered in darkness, before Odin's father destroyed his army and took the destructive material known as Aether back to Asgard for safe keeping. A forthcoming alignment of the nine realms that make up our universe will soon give him chance to rectify his loss.

Jane is currently ransacking London in her search for any evidence that may lead to Thor's return when Darcy (Kat Dennings) happens upon a portal into another realm inside an abandoned building frequented only by teenagers. While the rest of the team joins the teens in throwing various items into the portal, Jane investigates further after finding a gateway of her own and becomes a host to the symbiotic Aether. Sensing something wrong under the surface, Thor ushers Jane away to Asgard.

The impromptu introduction of Jane to Thor's family does not last long as the Aether draws Malekith toward Asgard in an unprecedented invasion. Great losses are had and Odin, steadfast in his rage, refuses to allow anyone in or out of the city, despite the massive cost of lives that could come with another invasion. Left with no alternative, Thor is forced to rely on his brother, Loki (Tom Hiddleston), in order to escape Asgard draw Malekith off-world for the Aether inside Jane.

Stakes are always high when it comes to villainous schemes in Marvel films, they are battling their second villain hell-bent on sending the universe into chaos with the only difference being that Malekith acts out of an ages old feud rather than a simple act of provocation on behalf of Thor. Should Malekith succeed, it will mean the end of life on Earth as we know it (again).

For all of the familiarity in the rock-em, sock-em ending, Thor: The Dark World does not suffer in its conclusion as Iron Man 3 did, by infusing a sense of originality by letting Natalie Portman use her brain to dispatch foes as well as Thor's brawn.

The production values instilled in all of Asgard were quite impressive in Thor's first outing, but the addition of Alan Taylor of Game of Thrones seems to have really upped the ante in terms of a crafting a dazzling world for demigods, dark elves and humans to inhabit. As good as Kenneth Branagh was setting the table in the previous film, Taylor excels in his directorial duties.

Thor: The Dark World is infinitely more entertaining when the story focuses on the rich interactions in between characters, moments which are lost during frequently occuring battles, but returned to in quick time. Chris Hemsworth has a seemingly infinite amount of charisma he calls upon at any time to sell both his prowess in combat and moments of warmth with Jane. However, his scenes with Hiddleston, a new favorite after his turn in The Avengers, are where the real fun is had when the siblings bounce witticisms off each other.

Thor may not have started out as one of Marvel's big guns when they iniated phase one of the Marvel Cinematic Universe, but he very may well end up its second biggest star (behind Robert Downey Jr. of course)when all is said and done.

By Colin Biggs September 30, 2009
Just from gleaning the surface of Office Space one would assume that there isn't anything simmering below the surface except for a raunchy work-comedy, but they would be wrong. After the harsh critical reception of his greatest work Moby Dick Melville wrote a collection of short stories called Bartleby and Benito Cereno perhaps the greatest slam at the time against industrial America. Bartleby is the story of a Wall Street copyist who has his three employees proof-read and copy law forms. Shortly into the story Bartleby starts responding to work commands with, "I would prefer not to." Frustrated by his employee's subordination the Narrator tries to have him fired but Bartleby refuses to leave the office. The Narrator comes back the following morning to find Bartleby living inside his office. Bartleby becomes increasingly less apt to perform basic functions as eating after he is jailed for trespassing and dies in a jail cell. What at once starts out as a comedy
8 comments
Read more

By Ben January 20, 2011
It's fair to say that a lot of comedians, and people in general, have had issues with political correctness, particularly when it is taken to extremes. People worry, and rightfully so, about cultural movements that aim to limit freedoms. PCU was released in 17 years ago, in 1994, when public worries about political correctness were cresting. It's a standard college comedy with the standard cast of characters: the everyman, Jeremy Piven plays the Van Wilder archetype; the stoner, Jon Favreau puts in an early role as the oft-confused Gutter; David Spade takes a turn as the wealthy elite; we also have the frosh, the love interest, and other standards. PCU fails to make a coherent argument against political correctness. The premise is that all the tolerance of different groups is fracturing society, while it would be better if we were all as one. You know, e pluribus unum and all that jazz. It's a pretty weak thesis, considering that political correctness originated as a
Read more