By Justine January 03, 2011
Months before Inception hit the theaters forums were alive with rumors that Christopher Nolan either accidentally or intentionally stole some details from another film, the Japanese anime Paprika. The biggest point of comparison for some bloggers and forum runners was the fact that both of the films featured a device that allowed a person, or people, to travel into another’s dreams and delve into their subconscious.

Minor points of comparison include scenes in Paprika where the character Paprika breaks through a mirrored wall by holding her hand to it, as well as a scene where a police detective falls his way down a hallway. Claims have been made that Inception abounds with imagery similar to or exactly like the anime movie, but with the recent release of the film on DVD and Blu-Ray, and with Paprika available for several years now, an examination of the two plots can be made more fully.

Let us begin with the primary claim—Inception stole the idea of a dream machine from Paprika. It is nearly impossible to deny the similarities between the two films on this account. The dream machine is meant to provide access into ones subconscious; it is the tool that allows both plots to flourish, but once that tool has been used, it takes the plots in different directions.

In Paprika, one of the machines used to enter the subconscious of the dreamer goes missing, and because it is in the experimental stage of development 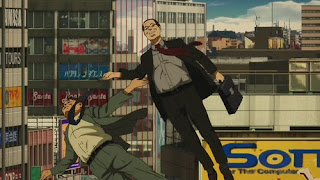 it inevitably begins to malfunction, infecting others with a single dream that drives them insane. Users under the dream machine’s power begin to jump off buildings, confusing the dreams they are having of flying with reality. For this film, the dream device acts as both a tool for the characters to go into the dream, and as a catalyst for anxiety in its own right. The machine is a form of terrorism, waging its power to put others under a spell until the rift has been closed between dream and reality.

Yet it is only with the use of its brother device that the heroine Paprika is able to emerge, harnessing her knowledge of the psychosis of dreams and reality to try to fix the damage done by the other dream machine. Also, while Paprika is within the dream, her dreams are visible to another doctor by use of a computer. Through the use of the computer, the other doctor has the ability to relay some messages. Ultimately, that ability to communicate is moot because dreams (in this case, a grandiose nightmare) invade reality.

For Inception, it could be argued that the dream machine is used as a type of terrorist device since its purpose by Cobb’s team is solely to raid the secrets hidden in one’s subconscious. In this film, however, the machine is not out of control and there is a predictable behavior from the machine. The application of the machine, despite it being in the middle of car chases, hotels or gunfights, was also in a clinical method—a drug is used to render Fischer asleep, and then all members of the team entering the dream are sedated before they are inserted into the dream world.

The main dangers that arrive from the use of the dream machine are the highly trained projections of Fischer’s mind looking for the thieves and Mal, Cobb’s memory projection of his dead wife. Since the infiltration of Fischer’s dream machine relies on heavy sedation, any death that of a team member will lead to limbo. Limbo is not death, however, and even being trapped in limbo does not kill the dreamer in real life. The dream world is well-contained within the dreamer’s subconscious, and the separation between dream and reality remains.

Another difference between the two films is that the dream machine in Inception is brought into the dream with Cobb’s team; it’s the reason for their ability to go deeper into the subject’s subconscious. Because it is Fischer’s subconscious that is being invaded, it is he that has control over the projections, characters that fill the dream for detail. The only exception to that is when Cobb unconsciously brings Mal into the dream, but even then Cobb is not in control of her. No one is.

As for the validity of the comparison between the minor details from Paprika being stolen by Nolan, it is difficult to say without looking at the shots in context. It is true that both of these movies feature a scene where a man is falling down the hallway. In Paprika, though, it is part of the dream world of the Detective Toshimi. He is dealing with the violence of his job while simultaneously reliving a moment of regret in his life. In this reoccurring nightmare, the detective is unable to deal with the regret at this point, and the repression he is going through manifests itself visually in the bunching up of the rug and the disappearance of the hallway floor beneath Detective Toshimi’s feet before he wakes up sweating.

In Inception, as I’m sure most of you are aware, the hallway begins falling out beneath Arthur’s feet because of Yusuf’s driving in the dream layer above. There’s no fancy symbolism or anything to account for it.

As for the scene in which the female heroines both break a mirror to travel into a new section of the dream, there is no way to justify the similarities—they resemble each other too closely. But we already know that Nolan was inspired by the 2006 film; too many sites have cited that Paprika was an inspiration for Ariadne. Nods to that imagery are allowed in film though.

In Inception, Cobb says that the most resilient form of parasite is an idea. If the parasite is an idea, then perhaps a movie is a form of virus, taking that parasitic idea at the core of its being and mutating it to create a more resilient strain of movie. This was the case with Inception and Paprika. Both films might’ve been spawned from the same idea, but it mutated into two separate and distinct movies. It is only through more thorough examination that the differences can be revealed to show how unique each of them are.

By Colin Biggs September 30, 2009
Just from gleaning the surface of Office Space one would assume that there isn't anything simmering below the surface except for a raunchy work-comedy, but they would be wrong. After the harsh critical reception of his greatest work Moby Dick Melville wrote a collection of short stories called Bartleby and Benito Cereno perhaps the greatest slam at the time against industrial America. Bartleby is the story of a Wall Street copyist who has his three employees proof-read and copy law forms. Shortly into the story Bartleby starts responding to work commands with, "I would prefer not to." Frustrated by his employee's subordination the Narrator tries to have him fired but Bartleby refuses to leave the office. The Narrator comes back the following morning to find Bartleby living inside his office. Bartleby becomes increasingly less apt to perform basic functions as eating after he is jailed for trespassing and dies in a jail cell. What at once starts out as a comedy
7 comments
Read more

By Colin Biggs June 01, 2018
Viewer: Han, bubbe, you don't have to explain every small detail of your backstory that was mentioned in the original trilogy. Han: I was named Solo by an Imperial recruiter. V: Wait, didn't you detail your father's entire career building Millenium Falcons? How do you not know your last name? H: ... V: ... H: There's a prequel cameo in the third act. V: Yeah, I'm just going to go ahead and leave, alright? H: I have a good feeling about this.
3 comments
Read more