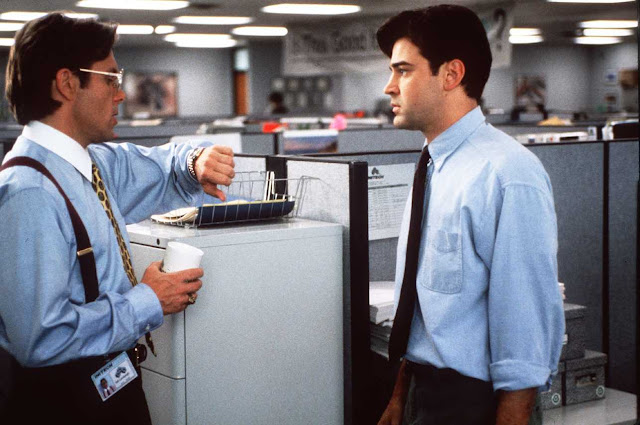 Just from gleaning the surface of Office Space one would assume that there isn't anything simmering below the surface except for a raunchy work-comedy, but they would be wrong.

After the harsh critical reception of his greatest work Moby Dick Melville wrote a collection of short stories called Bartleby and Benito Cereno perhaps the greatest slam at the time against industrial America. Bartleby is the story of a Wall Street copyist who has his three employees proof-read and copy law forms. Shortly into the story Bartleby starts responding to work commands with, "I would prefer not to." Frustrated by his employee's subordination the Narrator tries to have him fired but Bartleby refuses to leave the office. The Narrator comes back the following morning to find Bartleby living inside his office. Bartleby becomes increasingly less apt to perform basic functions as eating after he is jailed for trespassing and dies in a jail cell. What at once starts out as a comedy has serious ramifications for the human condition and how soulless post industrial conditions in the workplace have made the working man, once skilled craftsmen, into mindless drones not capable of finding the energy to live.

At this point I'm sure you understand where the similarities between these stories lie. Peter Gibbons works at Initech where he backs up software for the upcoming Millenium. After a hypnotherapy session where he no longers feels so bad about his job life for Peter turns itself around. He meets someone who shares his interest in Kung Fu, his evaluation with The Bobs results in a promotion, etc. Of course the irony of the story is that while Peter's refusal to perform work functions results in a promotion with stock options his hard-working friends Michael and Samir end up losing their jobs after corporate downsizing so, "Lumbergh's shares raise a quarter of a point."

Whereas Bartleby's function was to perhaps prove the futility of protest Mike Judge aims for a much less fatalistic ending. After attempting to swindle enough from Initech to never set foot in a cubicle again Peter sees the error in his ways and goes about returning the money and accepting going to jail. Fortunately a much abused employee Milton finds the money and burns down the company releasing Peter from any jail-time.

Peter joins his neighbor Lawrence(perhaps one of the funniest side characters ever!) working for a construction job where he can interract with the great outdoors where he finally finds an occupation worth having. Maybe there is hope for us after all.

By Ben January 20, 2011
It's fair to say that a lot of comedians, and people in general, have had issues with political correctness, particularly when it is taken to extremes. People worry, and rightfully so, about cultural movements that aim to limit freedoms. PCU was released in 17 years ago, in 1994, when public worries about political correctness were cresting. It's a standard college comedy with the standard cast of characters: the everyman, Jeremy Piven plays the Van Wilder archetype; the stoner, Jon Favreau puts in an early role as the oft-confused Gutter; David Spade takes a turn as the wealthy elite; we also have the frosh, the love interest, and other standards. PCU fails to make a coherent argument against political correctness. The premise is that all the tolerance of different groups is fracturing society, while it would be better if we were all as one. You know, e pluribus unum and all that jazz. It's a pretty weak thesis, considering that political correctness originated as a
Read more