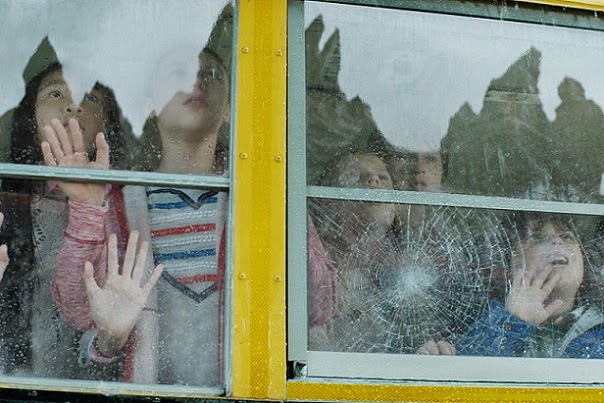 Toho's greatest creation came to the U.S. in 1998 and promptly crashed and burned with the assistance of Roland Emmerich. The film did poorly for the reason most of Roland Emmerich's recent films haven't done well; Emmerich has an eye for the explosions, but not of the stakes. Making matters worse was Godzilla really wasn't Godzilla, just an over-sized dinosaur scurrying about New York City.

The story has to be grounded in the eyes of character like Joe (Bryan Cranston) and Ford Brody (Aaron Taylor-Johnson). In one of several nods to Steven Spielberg, Gareth Edwards introduces the Brody family through an instance of tragedy which sets the course for everything that follows. It is table-setting sure, but it allows for characters as thinly written as blockbuster characters usually are to feel real. The focus for 2014's Godzilla is on Navy EOD tech (Aaron Taylor-Johnson) fighting to reunite with his wife (Elizabeth Olsen) and young son.

Patience is required before the heavy duty battles begin. Gareth Edwards ratchets up the tension with displays of just how small we all are in the face of natural disasters and violent convergences between colossal beasts. There are huge stakes in adding such monstrous creatures—referred to here as MUTOs: mobile, unidentified, terrestrial objects—to a world inhabited by humans. Further adding to the smallness of man are the armed forces who, in their rush to cease this new threat, potentially endanger millions more.

Similar to 1954's Gojira a layer of social commentary is present beneath the populist fare. Ken Watanabe features as one of the two scientists, Bryan Cranston is the other, who serve as the moral conscience of the film amidst the destruction. Dr. Ichiro Serizawa cautions that perhaps we are dealing with a disaster we couldn't understand. "The arrogance of man is thinking nature is in our control…" and when pressed against disaster, man resorts to nuclear weapons. The point isn't as relevant as it was sixty years ago, but given man's inherent need for mutual destruction, it shouldn't go unsaid.

Choosing to reveal Godzilla in bits over the course of two acts won't be a popular choice for all audiences, but it is the right call. Audiences want Godzilla, yes, but not the risk of over-saturation. Hannibal Lecter in Silence of the Lambs, Jaws in Jaws and the Joker in The Dark Knight are all magnetic characters, but none of them take central focus of their respective films. Keeping the appearances limited allows for a rightful amount of awe to take place when the King of Monsters is fully revealed during one of several brawls. The creature design and visual effects are truly something to behold. Each monster is larger than the last and when the titular beast is revealed it sends a shiver through the collective spines of moviegoers.

With ticket prices rising over the last decade, it isn't always easy to recommend upgrading viewing experiences, but to fully appreciate the sheer scale of Godzilla, IMAX is well worth the extra surcharge. Quite simply this is one of those instances where blockbusters justify the hype.

By Colin Biggs September 30, 2009
Just from gleaning the surface of Office Space one would assume that there isn't anything simmering below the surface except for a raunchy work-comedy, but they would be wrong. After the harsh critical reception of his greatest work Moby Dick Melville wrote a collection of short stories called Bartleby and Benito Cereno perhaps the greatest slam at the time against industrial America. Bartleby is the story of a Wall Street copyist who has his three employees proof-read and copy law forms. Shortly into the story Bartleby starts responding to work commands with, "I would prefer not to." Frustrated by his employee's subordination the Narrator tries to have him fired but Bartleby refuses to leave the office. The Narrator comes back the following morning to find Bartleby living inside his office. Bartleby becomes increasingly less apt to perform basic functions as eating after he is jailed for trespassing and dies in a jail cell. What at once starts out as a comedy
7 comments
Read more

By Justine January 03, 2011
Months before Inception hit the theaters forums were alive with rumors that Christopher Nolan either accidentally or intentionally stole some details from another film, the Japanese anime Paprika. The biggest point of comparison for some bloggers and forum runners was the fact that both of the films featured a device that allowed a person, or people, to travel into another’s dreams and delve into their subconscious. Minor points of comparison include scenes in Paprika where the character Paprika breaks through a mirrored wall by holding her hand to it, as well as a scene where a police detective falls his way down a hallway. Claims have been made that Inception abounds with imagery similar to or exactly like the anime movie, but with the recent release of the film on DVD and Blu-Ray, and with Paprika available for several years now, an examination of the two plots can be made more fully. Let us begin with the primary claim— Inception stole the idea of a dream
Read more

By Colin Biggs June 01, 2018
Viewer: Han, bubbe, you don't have to explain every small detail of your backstory that was mentioned in the original trilogy. Han: I was named Solo by an Imperial recruiter. V: Wait, didn't you detail your father's entire career building Millenium Falcons? How do you not know your last name? H: ... V: ... H: There's a prequel cameo in the third act. V: Yeah, I'm just going to go ahead and leave, alright? H: I have a good feeling about this.
3 comments
Read more