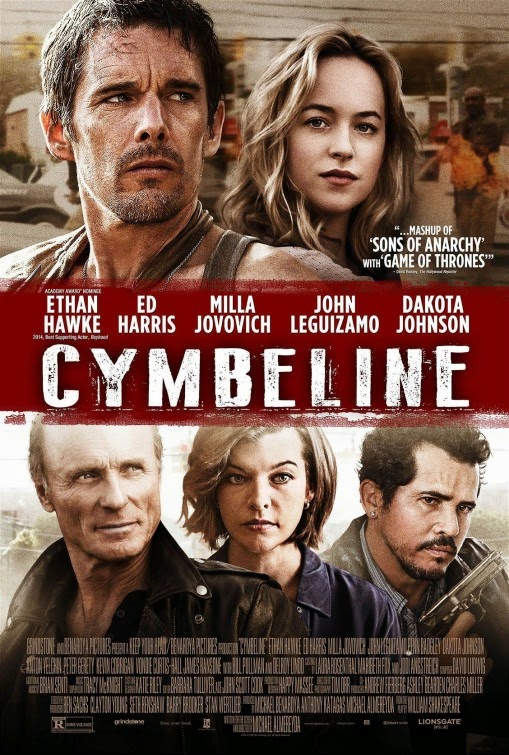 Cymbeline is director Michael Almereyda’s second Shakespeare adaptation set in modern day, his last being 2000’s Hamlet, also starring Ethan Hawke. The Bard’s late work tragedy, previously set in the Royal Court of Olde England, receives a face-lift, updated to a war between the Roman police force and the Briton Motorcycle Club ran by Cymbeline (Ed Harris). The King trades in a crown for an Uzi and a leather jacket as a drug kingpin troubled by familial strife. His second wife (the serpentine Milla Jovovich) despises Cymbeline’s daughter, Imogen (Dakota Johnson, proving she has acting chops not found in Fifty Shades of Grey), for not marrying her son, Cloten (Anton Yelchin).

In secret, Imogen has pledged herself to Posthumus (Penn Badgley), much to Cymbeline’s displeasure. Posthumus, like all men freshly betrothed, proceeds to make a bet that his friend Iachimo (Hawke) cannot steal his love’s chastity; Hawke is evidently having a ball with the part of a man of very little moral fiber, slithering through his scenes, abusing the trust of all those who place such faith in him.

Read the rest at Sound on Sight!