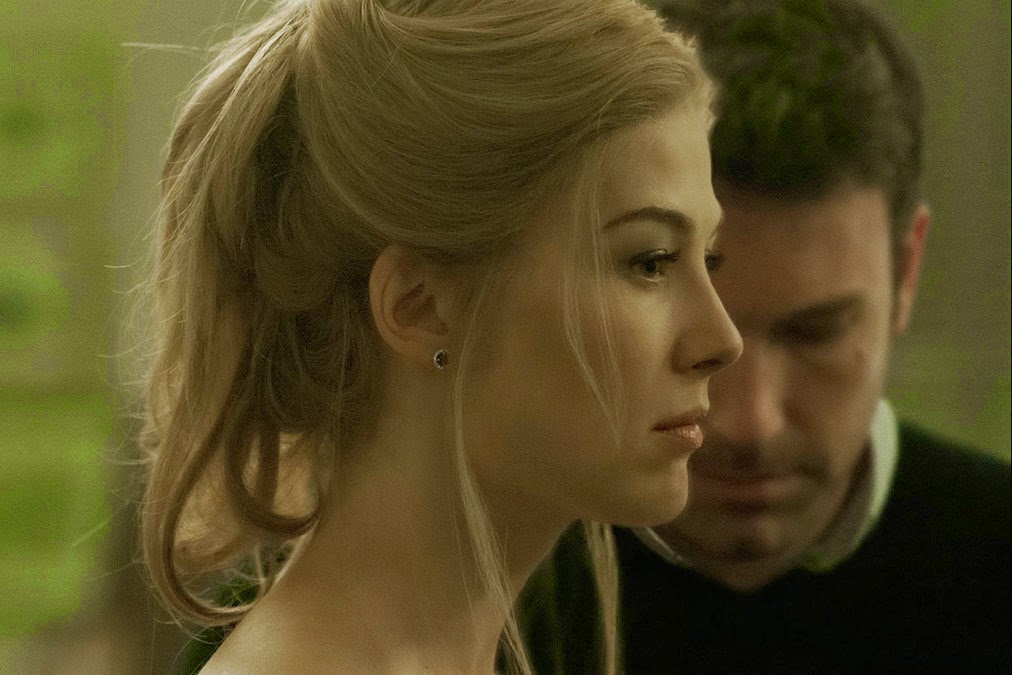 Nick and Amy Dunne have a perfect marriage. Well, if you ask other people anyway. Nick and Amy aren't like other couples. They may live in the suburbs of the Midwest, but the Dunnes are still with it. Amy always made Nick promise her that they wouldn't end up like those husbands and wives that watch CBS on Friday night and have a booth at the local diner. It's just not in her DNA.

You see Amy (Rosamund Pike) has always been different. Her parents wrote an award-winning series of children's books based loosely around her upbringing. She had her choice of Ivy League colleges and no shortage of events on her social calendar. Amy met Nick cute at a party and they had their perfect kiss that wouldn't feel out of place in one of Nora Ephron's romantic comedies. Marriage followed suit and they were the envy of power couples across the five boroughs. And what a difference five years makes. The morning of his fifth anniversary Nick sits down at a bar with a stiff drink at hand. Anniversary games used to be fun and spontaneous, now they serve as another reminder of the unfulfilled promise from happier years.

This year Nick (Ben Affleck) comes home to an envelope waiting for him on the kitchen counter, but no wife. The police are called in and all of the normal procedures are taken during the investigation, but Amy's disappearance draws a national spotlight. Media campaigns center Nick as the face of grief, but focus shifts to him when the police suspect he may not be as innocent as he claims. Now the entire conversation has changed to: did Nick Dunne murder his wife?

A whodunit on the surface, Gone Girl looks like just another procedural movie, but fundamentally it is uncomfortable laughs and a sinister sense of humor wrapped in a tidy package.

Nick and Amy's ordeal is effective as a mystery, but David Fincher, working from a script adapted by Gillian Flynn, elevates the story when it scrutinizes the "normalcy" of marriage. Gone Girl opens with a shot of Amy, but the next scene features Nick centered against the backdrop of his suburban life following him in his wife's absence. Despite the title and opening scene, Fincher seems to be saying that this is Nick's story. The problem is this isn't about Nick Dunne. Nick is a pawn in a much bigger story.

Tried in the court of public opinion every single day on cable news, Nick realizes that the woman he walked down the aisle with, and the woman he's been married to are not one in the same. As Nick is torn down by a press with a ghoulish fascination with those who grant them the notorious acts they so desperately cover, the cracks of modern media peek through the veneer. We hold absolute strangers to a higher standard than we hold ourselves, yet when they inevitably fail, onlookers unload onto them with both barrels.

The Dunnes might be a hard sell for audiences that demand relatability in their leads, but no one should question the performances Pike and Affleck put in. Ben Affleck spent years in an adversarial relationship with the press turned against him, and the experience paid off in his portrayal of Nick Dunne. Affleck has the face of a leading man, but he is always more interesting when he toes the line between black and white. For those who aren't familiar with Rosamund Pike from An Education, take notice. Though if viewers remember Pike from An Education they might not recognize her anyway. Pike tears and claws through her role with a physicality that rivals Christian Bale. She has the unenviable task of being asked to fit into a man's fantasy and also ridding herself of the Cool Girl persona simultaneously.

Even Tyler Perry, whose casting made a sizable portion of online readers nervous, is one of Gone Girl's highlight as sleazy celebrity defense attorney Tanner Bolt. Another highlight being the score by Trent Reznor and Atticus Ross. It succeeds as a double-edge sword that mirrors the monotony of suburban life, yet also instills a sense of dread to come.

Oh, what one would give to glance a peek inside the mind of a loved one. Gone Girl might give viewers pause before they gather their belongings to step out of the theatre and spend time with their spouses. As much as we know those we love, it's impossible to know them completely. Those elemental fears and emotions we would all prefer just go away are great for a director of Fincher's talents to prey on. Though it should go without saying the man who brought us Fight Club pulls dark laughs from audiences almost unwillingly. Viewers won't even feel the knife going in.