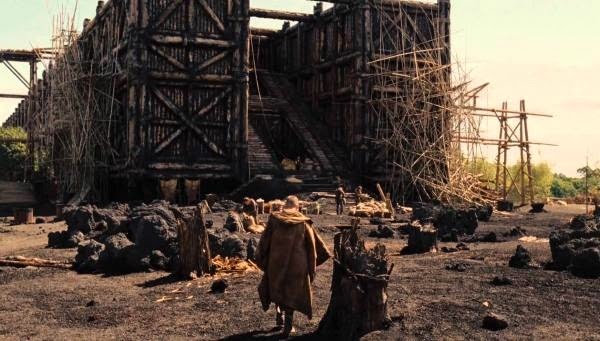 Black Swan bought a lot of critical and commercial goodwill for Aronofsky in 2010, yet no one would have anticipated he would invest that goodwill into a Biblical epic, especially one nearing three hours long. Whether the new elements added to Noah will enthrall or enrage audiences is yet to be seen, but win, lose or draw, a project of this epic of scale is worthy of your attention.

Noah (Russell Crowe) is a heavily taxed man. Plagued with nightmares of damnation and death, he is reached out to by the Lord to undertake the building of an ark before the apocalypse lays waste to all the eye can see, a cleansing fire before a great flood to wipe evil from Earth. Noah's task is to build an ark, load it up with all of the animals and start anew. As Elwood Blues would put it "he's on a mission from God."

Noah’s wife, Naameh (Jennifer Connelly, playing another Crowe's wife again), is skeptical about her husband's calling. His claim that God wants all of humanity wiped away in this flood extends to even his own family. The massive ark will take years to build and with the assistance of his sons Shem, Ham and Japeth (Douglas Booth, Logan Lerman and Leo Carroll) and adopted daughter Ila (Emma Watson).

Noah has a great deal of faith to the biblical material that should suffice Christian audiences. Sethians and Cainites are explained in their totality along with the fall of man and the first murder. What might offend "believers" are the fantastical additions like that of The Watchers—fallen angels whom God has seen fit to make into rock monsters—and the depiction of angels. A note for those expecting a haloed, fluffy-winged Clarence: don't.

Perhaps more offensive to some is Crowe's Noah being okay with what could be labeled genocide. The particular irony of that is Aronofsky's interpretation of the Old Testament Noah is more accurate than those who preach it now.

Crowe's performance as Noah is far from the kindly shepherd leading all to salvation. He drunkenly rages against his fellow man. Doing his best to save what he can, but would take no small pleasure in watching the wretched drown in the damned waters. It’s as if his characters of moral fortitude from The Insider and Gladiator were intensified by a thousand. His quarreling partner is King Tubal-Cain (Ray Winstone).

Tubal-Cain, despite his depictions in TV spots as an obvious villain, presents a philosophical debate that runs throughout Noah. If all men are created from Original Sin, why should we be smote for it? Tubal-Cain is a humanist who rebels because God has left us with no stewardship. “No one’s heard from the Creator since he marked Cain. We are orphan children.”

By contrasting these two men with very different interests it offers a point to ponder during some of the film's slower moments. Willful disobedience is not ideal, but if obeying His' orders comes at the price of our extinction, then some midpoint must be reached.

The film is technically ambitious, recreating Noah's ark by utilizing practical sets and filling it two-by-two with ILM's creature renderings. Placing the film in untouched swaths of land in Iceland allows for some truly breath-taking lensing. Aronofsky-regular Matthew Libatique (The Fountain, Black Swan) creates stunning shots, in particular the haunting mass of victims seen just above the crashing waves when the ark takes float. The First Seven Days scene is also another contender for best shot of 2014.

At times during the film it feels like Darren Aronofsky was not the only chef in the kitchen. Sure, Paramount had to combat with religious audiences who felt that the film owed them a literal translation of the Bible, but upon actually seeing the final product, they should be quite pleased. If there are flaws to be pointed out in the film, it's that capable actors like Jennifer Connelly and Anthony Hopkins aren't given as much to do as Russell Crowe and Ray Winstone.

The ending won't particularly surprise anyone in the audience, though Aronofsky does throw enough curveballs to keep it interesting. Noah isn't the complete auteur's vision that fans of The Fountain may have hoped for, but it is impressive he got as much of his cut out there as he did. Considering the massive undertaking and budget that is a win in itself.

Noah is a thoughtful and a worthy addition to its genre.