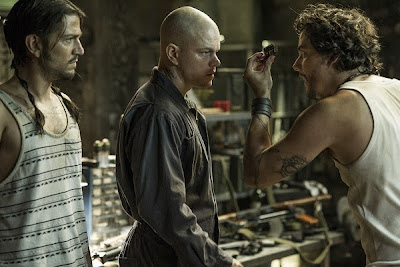 The summer movie season, in this day and age, is almost strictly reserved for rock 'em, sock 'em superheroes, super spies and giant robots and monsters. Escapism is in full swing during these months and audiences generally reward those pictures that put a smile on their face as they exit the theatre.

Neill Blomkamp is no stranger to this season (his debut film District 9 was also a summer release) but where he differs from the action crowd is a tendency to lean toward the subversive. District 9 was an example of dropping some real-world truths into the cineplex and introducing viewpoints typically not seen in a blockbuster.

Earth in the year 2154 is a world made up of favelas and a lack of resources, the wealthiest citizens have left and inhabit a station above the Earth where overpopulation, hunger and sickness is no longer an issue. With the technological innovation of medpods present on Elysium, broken bones are mended immediately and cancer can be waved away in seconds. Citizens there are virtually immortal.

Such luxuries are vied after by people like Max DeMarco (Matt Damon) who we meet as an impoverished child reaching toward a paradise he could never afford to live in. Flash forward a twenty or so years, and the boy is now a weary ex-con, who no longer rages against the machine. His only opportunity to vent lies in trying to shoot the breeze with robotic police and parole officers, who have a failing in humor or sarcasm. For put upon Earth dwellers like Max the only recourse available to leave Earth is a hacker (Wagner Moura) named Spider with few qualms about stealing and kidnapping to get others to Elysium.

Opposing those seeking a reprieve are Secretary Delacourt (Jodie Foster) and her private mercenary Kruger (a maniacally unhinged Sharlto Copley). Delacourt is the head of Homeland security on Elysium, tasked with protecting the space station in all the ways that would be deemed unacceptable to others, especially Elysium leadership. Kruger renders these services personally for Secretary Delacourt and takes great delight in doing so.

Max refuses Julio (Diego Luna) and Spider's initial offer to earn some cash moonlighting as a car thief, but after he is doomed to death by a mishap in the workplace, Spider is his last chance to get to Elysium and to one of the medpods that could be his salvation. That chance? It comes by kidnapping the CEO of Armadyne, the company that services Elysium.

What follows afterward will be familiar to those who watched District 9: careful world building that loses itself in the high-speed chase between Max and Kruger.

Matt Damon and Sharlto Copley ground the proceedings with physicality while both operating from the opposite spectrum of humanity. Damon distances himself from his Bourne character here by falling prey to the fears and selfishness that don't inhibit other template action characters. Copley, known mostly for his roles as Wikus and Murdock (The A-Team), creates a vicious chracter in Kruger, one whose psychotic nature gives Max a very frightening obstacle.

The degree of world building that takes place in Elysium is staggering, District 9 was very impressive for its budget, but Elysium shows off what a talented filmmaker can do with a bigger budget. The panicked nature of living in a slowly dying, overpopulated planet blends seemlessly with the surveillance state that is Earth in the twenty-second century. It's a lived in Los Angeles that doesn't resort to that over-saturated cityscape of most sci-fi films.

However, a movie is only as good as its flaws allow it to be and there are some incongruities as the third act rolls out. The security on the habitat consists of gigantic holes that should not be there in order for Max to proceed through his journey. Robots are on the spot immediately to throw poor people out of med pods, but when firefights break out later, they are nowhere to be found. Other characters find themselves making spontaneous changes of heart that don't correlate with any prior scenes.

Given those issues, the overall product and positive impressions regarding all other aspects of Elysium are more than enough to recommend Blomkamp's sophomore effort. Original material like this should be rewarded.