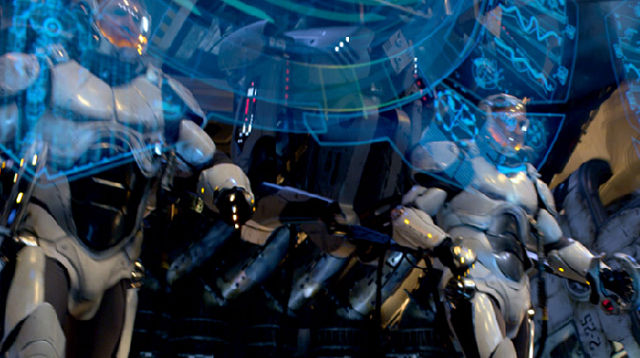 The concept of monsters and giant robots bashing each other is certainly not new (Godzilla, several anime shows, etc.), but Pacific Rim has a secret weapon up its sleeve: Guillermo del Toro. Every picture Del Toro makes is infused with an enthusiasm for creatures and fantastical elements that could only come from the mind of the man who brought us Pan's Labyrinth, Hellboy and Cronos.

In the year 2020, a collision of techtonic plates in the Pacific has created a breach in the Earth's crust releasing massive beasts called the "kaiju" that plague cities around the world. To combat the threat, humans build gigantic mechas (named jaegers) in hopes that they can ward off the monsters threatening humanity. Instead of remote operation, these mechas can only be operated by two pilots mentally linked in "drift space".

(As a quick aside, as cool as it looks for two people to pilot the jaegers, but why a robot needs a human to act out a punch in this age of remote control warfare is just a little puzzling.)

The Jaegers prove to only delay the destruction a little longer and in the midst of the chaos, world leaders decide to shelter themselves inside kaiju-proof compounds. It goes without saying that these kaiju-proof compounds work in name only and with the jaegers out of operation, there aren't many options left.

Marshal Stacker Pentecost (Idris Elba) crafts a plan to use nukes to close the breach from the inside. To do so, he needs to convince former jaeger pilot Raleigh Beckett (Charlie Hunnam), to end a self-enforced exile and partner up with Pentecost's assistant, Mako (Rinko Kikuchi). Even if Pentecost manages to bring Raleigh onboard, the odds look slim, the only weapon at their disposal is an obsolete jaeger.

It was proposed by critics that the thrill of Pacific Rim would be less palpable because of the Transformers series, but those critics were very wrong. The fight scenes are beautifully choreographed, with each kaiju battle unique in its aesthetic, placing the audience right into the heart of the action. Everything is shot cleanly, without any of the shaky-cam mess or the extreme close-ups that diminish the grand scale with which everything unfolds. So thanks should be given to del Toro's regular cinematography Guillermo Navarro as well as editors John Gilroy and Peter Amundson for capturing the essence of a movie featuring giant robots should be.

Pacific Rim doesn't just shine in its action, but it also beats Transformers in another aspect where that franchise failed: humanity. The human factor that was completely missing in Michael Bay's efforts, is available in abundance with their central cast proving to be very capable in creating characters worth caring about. del Toro's picture succeeds because Charlie Hunnam, Rinko Kikuchi and Idirs Elba take characters frequented in many pictures and layer them with charm, warmth and unity. When an audience is watching robots beat up monsters it's easy to forget the human stakes involved, but with this talented cast, that is never a worry.

That's not to say the film works completely. Years worth of character backgrounds and initial battles are fit into a 20 minute prologue and while that part works fine, the rhythm is lost afterward. Leaving sags during the film where it feels like del Toro is just following a blueprint with story elements feeling too similar to moments other big-budget flicks. Luckily, the highlight of the action sequences and the cast outweigh any of those problems.

Traditionally, Guillermo del Toro films tend to be more rewarding when they are on a more intimate scale, but Pacific Rim is... not really intimate. Still, with all that spectacle onscreen, it's hard to take in this clash of mechanical and monstrous titans without enjoying yourself. Monster movies like this are seldom seen anymore, but del Toro's child-like glee offers a promise to the audience: you will have a blast.