Eagle Eyes Can Catch Hoffman as The Master 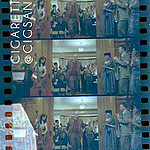 The team at Cigarettes and Red Vines has received a few tidbits from Paul Thomas Anderson's forthcoming The Master, starring Philip Seymour Hoffman as a man who creates a new religion following World War II. The film will be Anderson's first effort since There Will Be Blood and the chance for a sneak peek at Hoffman in character is almost too tempting to pass up. Luckily, Anderson sent over a negative for Cigarettes and Red Vines to develop, and a look is available below.


I cannot make out much, but for those of you with better vision, enjoy!